The first day of summer 2021 is on 20th June 2021 EDT and 21st June 2021 UTC. Find all the dates and timings of beginning of summer season as per different time zones in the Northern Hemisphere. This post elaborates dates, timings and customs of first day of summer 2021 in different parts of world. As per UTC timings, summer’s first day starts at 11.43 PM on 20th of June 2021, Sunday in the USA and Canda. In UK and India, it falls on 21st June 2021, Monday. However you can refer to timings of other zones further in this post along with more details on summer in Northern Hemisphere and Southern Hemisphere. The summer days are the longest days of the year and marks a great time for people to enjoy outings at cooler regions and beaches.

The 1st day of summer season is also known as summer solstice which occurs when Earth’s North pole is tilting towards Sun and Sun is just over the Tropic of Cancer (i.e. in Northern Hemisphere). The summer season fall during months of June, July and August with some variations. The Southern Hemisphere observes the days of winter at the same time. 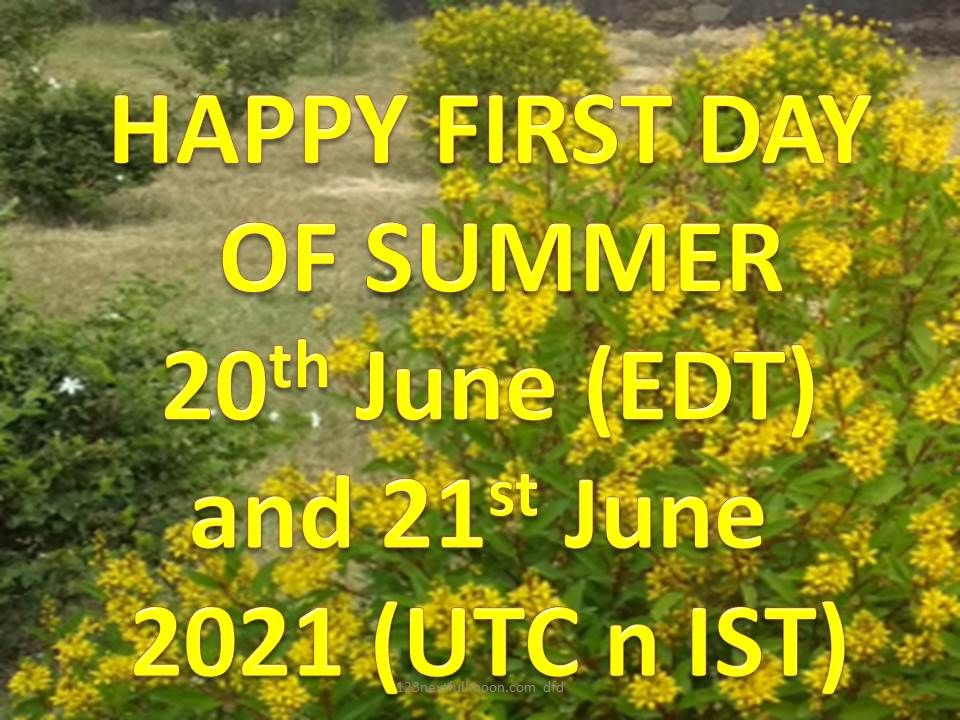 When is 1st Day of Summer

Check out the first day of summer 2021 in different time zones of world:

Start of Summer – Date and Time

The above timings are marking first day of summer 2021 or beginning of summer season in Northern Hemisphere. You can check out the start of summer for Southern Hemisphere in our next sub-section detailing on Summer in Australia.

what is spring equinox

First Day of Summer in Australia

Australia experiences hottest days in December, January and February which are cooler days for the Northern Hemisphere. Temperature varies from 16 to 26 degrees in major cities like Melbourne, Perth, Adelaide, Brisbane, Sydney and Canberra. Some tropical regions also has temperature maximum to 32 degrees. For the southern hemisphere, the summer starts with December month covering major countries of Australia, New Zealand, Indonesia, Maldives, South Africa and some parts of South America.

Australia’s entire mainland falls in Southern Hemisphere and all seasons and climate are juxtaposing the northern world. You can check out more details on Summer Solstice in our separate post.

when is the next blue moon

when is the next full moon

As the 1st day of summer always fall in June month, it is also known as June Solstices. Solstices and Equinoxes mark beginning of new season. These celestial events occur twice in a year, i.e. in March, June, September and December. Many cultures across world follow specific customs to celebrate the first day of summer. While the June solstice features the longest day of the year when certain part of earth receives maximum sun light; the December solstices are the shortest days of the year. The equinoxes mark the days of the year when the day and nights are of similar duration. March and September month features equinoxes when Earth receives darkness and sunlight for equal twelve hours.

Check out the first days of other seasons including first day of fall and autumn equinox posts at our site for interesting dates, time and customs pertaining to fall season. First day of seasons are closely followed by different cultures of world as well by astronomers. First day of summer 2021 starts the summer season and brings special days and celebrations like Strawberry fairs, Fresh fruit festival, Tokyo Festival, Summer Shakespearean festival and others. Summer days are also special as schools and colleges worldwide enjoy longest vacations during the period which are generally the vacations after the completion of academic years. Hence the summer breaks are generally time for picnics and outings in all countries. Stay with us for more info on first day of autumn and autumnal equinox too.